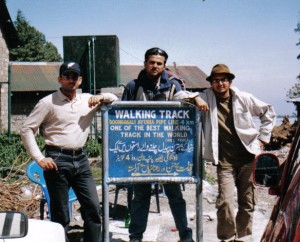 As we settled our bags at Daewoo Bus Terminal, for their shuttle service to ABBOTABAD but the last one was gone already. BILAL again started playing with his mobile phone and it was his cousin again. We were thinking to book a Taxi to ABBOTABAD? Suddenly BILAL came up with the idea that we can go to DUNGA GALI and can camp there. In no time we decided to give his idea a go ahead signal and we find a Driver who can carry us there we asked him to take us to some good restaurant first so that we can have some meal as the hunger was getting out of control. The driver decided that we should go to a driver hotel as it was good but it was about 20 minutes drive from there well we decided that ok we can wait for 20 more minutes and then after 30 minutes we reached there at SHAH JEE DHAABA, the food and the Tea were good and we enjoyed every bit of our little stay there. 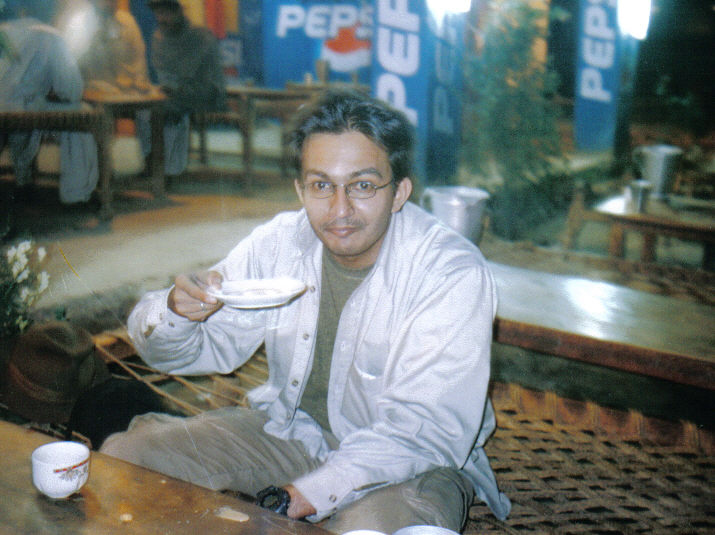 Then the journey begins again BILAL took the front seat and me along with ZEESHAN settled in back seat trying to take a nap  but our driver has other ideas in his bag and also was in a hurry to get back to his home as well. He was constantly chatting with BILAL telling stories about every turn on the road about how many accidents are associated to that turn and how many died in the result but meanwhile he wasn’t ready to reduce the speed and he was literally turning the whole steering and was lying on the steering every time he decides to turn the car I think he was a bus driver wrongfully accused as Taxi Driver. We were feeling dizzy after the dinner but thanks to him sleep is the last thing we were thinking on that ride. We were moving fast but the scenes outside are awesome but as we move further darkness occupies the road and we can see nothing but the car head lights. When we reached BAGNOTER suddenly the car stopped.

“Don’t worry I’ll fix it”, the driver was confident in his voice.

The Driver opens the bonnet of the car and started finding the problem we were unable to see him when suddenly we heard BILAL.

“Shit Man there is a graveyard on our left side”

After a light humor we went outside the taxi to find what the driver is doing he was busy with the engine so we decided to take a walk around to look down from the hill. As we moved a bit we saw a dark house and suddenly we heard dog’s coming straight towards us and that was it we ran back to the car but thankfully the dogs didn’t come out of that house over the cliff. The Silence of the Dog’s made us calm but we were really frightened. The Driver closed the bonnet and in Head Lights he too looks like a zombie.

The problem was sorted out and the Taxi Express started again and in no time we were in DUNGA GALI.

We were tired and as we put our luggage down from the Taxi BILAL suddenly moved to the Tuck Shop when he returned we find a Torch in his hands I look at ZEESHAN and he said, “It seems we are spending the night in the woods and making documentary on Blair Witch Project”. BILAL came back with a person who told us normal Camping Space in on the upside and when we saw towards that upside it was dark. We saw a board placed near the gate as we put torch on it was a public notice to beware from few animals and to our worst fear Man Eater Tiger was mentioned on it. Man we left our weapons back home. BILAL told us that he was just teasing and we are moving downside as we get a room in a guest house we didn’t waste a second and move to the room in a hurry and the best thing that happened that night was a peaceful Sleep at last.

The morning was great with bright sunshine but chilly wind was disabling us to get out from our blankets but we have to move. While taking our breakfast we started planning again. We have a laugh over it that we are planning again so we quit and decided to move. We pick our camping luggage and started walking on DUNGA GALI – AYUBIA Pipeline track that was 4 km long made by the East India Company when they were here over a century ago. The pathway was surrounded by trees and it was a site to watch for and to walk on it was real excitement. We were moving sharing Gossips, Jokes and taking snaps. The Journey was fun as if we were alone on that track but soon we find people crossing us from opposite direction. We even find a kind of tuck shop in the middle of the track so we decided to have some drink and took some pictures there too. They put the soft drinks in water from a fall and it was chilly. Chilled SHEZAN and COKE was a real treat. After some time we decided to move fast towards AYUBIA to have some fun there too so we speed up the walk and after an hour we were entering AYUBIA.

AYUBIA was filled with people as it was a famous tourist spot for people to come and enjoy the beautiful scenes and chair lift. We decide to move towards the chair lift and we wait for our turn in the meanwhile we decided to have some PAKORA’S. The chair lift take us up the hill not Jack and Jill went up the hill but was all jacks that went up the hill may be anticipating that they will find Jill up there but as usual no luck. So we decided to install the camp at last and took some pictures with it to bluff the world that we were camping all the time as planned for the trip. The pictures were fine and installing the camp was a good experience. We really enjoyed our time up there.

After spending an hour there we decided to move down and have Lunch, Chicken KARAHI with black pepper was the Menu. Then we start our journey back from Pipeline Track again and after around 2 hours we got back to DUNGA GALI.

Then we decided to move to the main taxi stand to get a ride back to Islamabad. We started negotiating with taxi drivers but the rates were too high for independent cars and nothing like Bus or Wagon was going to Islamabad. After a lot of thinking we decided to take an independent taxi and to move fast as we have a booking with Daewoo, Islamabad around 6:00 p.m. The trip towards Islamabad started with our driver MURAD continuously talking and he was too very keen in informing us about the accidents that happened on that road. After some time he was giving us information on almost everything that happens around him from Filth to Myths. After a tiring Journey we reached Islamabad.

We reached Daewoo, Islamabad and get our tickets back for Lahore. There we meet some imperial college students who were returning from MURREE. We shared our adventurous tour with them and they looked fascinated. We got back to Lahore planning to be back for a trip like this soon again but I believe it’s a life time trip no matter whatever we do these moments will not come again.

It’s been a time since we make this trip but the memories are still fresh.

This really answered my problem, thank you!

Pretty good post. I just stumbled upon your blog and wanted to say that I have really enjoyed reading your blog posts. Anyway I’ll be subscribing to your feed and I hope you post again soon.

This is something I have always wanted to do.

I still can’t figure these out.

I have to say, many of these comments strike a real chord with me but some peoples responses seem to get a bit too aggresive if you don’t agree with their opinions.

I was recommended this website by my nephew. I am not sure whether this submit can be published by him as nobody realize such comprehensive concerning my own difficulty. You are amazing! Thank you!

I just want to say I’m very new to blogging and honestly liked you’re web-site. Likely I’m want to bookmark your site . You actually have superb articles. Appreciate it for sharing your web site.

We shold all gang up on them

Aw, this was a very nice post. In idea I wish to put in writing like this additionally ?taking time and precise effort to make a very good article?however what can I say?I procrastinate alot and on no account seem to get something done.

I was curious if you ever considered changing the page layout of your site? Its very well written; I love what youve got to say. But maybe you could a little more in the way of content so people could connect with it better. Youve got an awful lot of text for only having 1 or two images. Maybe you could space it out better? Thank you!

Thank you for some other informative website. The place else may I am getting that kind of info written in such a perfect way? I have a venture that I am just now operating on, and I have been on the glance out for such information.

Hi, I do not even know how I ended up here, but I thought this post was good. I do not know who you are but definitely you are great blogging. Cheers.

Fact is stranger than fiction.

Hmm is anyone else having problems with the images on this blog loading? I’m trying to figure out if its a problem on my end or if it’s the blog. Any feedback would be greatly appreciated. Kudos!

Hey there! I could have sworn I’ve been to this website before but after reading through some of the post I realized it’s new to me. Nonetheless, I’m definitely delighted I found it and I’ll be book-marking and checking back often! Thank you!