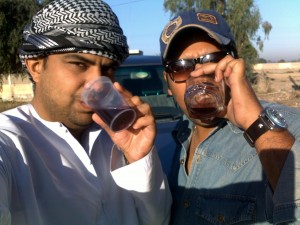 Desert, Safari, Dubai: like everyone on earth these words are very catchy and caught myeyes as well, Desert is always a very inspiring area that is covered with Sand infact tons and tons of sand I have passed many times from desert but that is only on carpeted roads with all the landmarks, milestones and lots of help if you have a flat tyre on the way. So, finally I decided that “why not to take the dessert in the special Arabic way: OFFROAD”. So, I and my jolly good fellow Mudasser made a plan to take the desert right from inside without any Milestone and Maps. So, on the second step as we have to choose the Desert and most importantly the entering point and a little help. 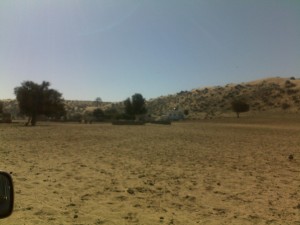 Finally we short listed the sandy areas and finally we decided to take on Great Cholistan Dessert, consequently we affirmatively chose Rahim Yar Khan from where we can easily enter the deserts on the paths of Sheikh’s of Dubai and UAE in the dessert. We decided to have the lunch in the center of nowhere in the dessert. 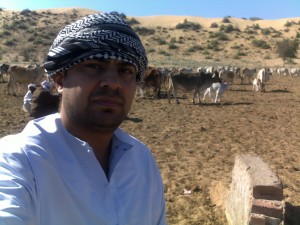 Our Journey begins with the complete preparation of food, few drums of fuel to be carried in the desert as if our fuel ends, then lots of drinks to take with which should prevent us from dehydration. And finally have to take another man onboard that has an important role to play as the driver and as a guide, guide to some extent. Now three of us were ready to see the extremity that we have never felt before, the nature of the desert.

I still remember that it was a someday in the end of February, we left Rahim Yar Khan and took the road from Sanghi Pul towards Qasar e Abu Dhabi and finally besides the palace of Sheikh Khalifa a road took us straight in to the dessert. On the Entrance point we were welcomed by Chinkra’s (Deer) and Falcons and few other birds. When our Hilux Jeep touched the sand and left the Road and it was a feelings that didn’t support release of endorphins in the body. Now on enetering Cholistan we found that there are different paths that were going in different directions, So we chosed the way that suits us rather our mind. On our way to desert we have observed different things that we have never been thru like miles of sands and no where to go.

Finally our guide cum driver tols us when we were almost an hour drive in the desert that we can see a tree that infact was the only tree of the desert and as we were on the go the temperature keep on going up, i being dressed like arabians feeling too good but heat is catching my happines, we finally decided to have a stop at that tree and should have a cup of tea. So, we made a sand Stove and collect some dried wood and by rubbing rocks put that on fire but let me tell you that was tough but we were happy to do that. felt sympathetic for our ancestors as well who have to do that every now and then.

Tea made on sand stove was the best tea that we can ever had but taking it while sitting under the tree infact the only tree was more fun in desert. On our journey ahead we were being told that the places that we are going thru are Bhagla, Chaye Wala & Bhai Khan,. So, these are the places that we were getting across as what we were told. now in the desert where we saw Sand we can also should not rule out the snakes, scorpions and Camels. we were surprised to know that the water from rain is collected in the little deep areas called Tobha and we found many of them, these are the only source of water for animals and people living there in the wild. 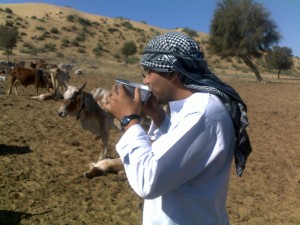 To my surprise when we reached to the place so called Bhai Khan we have seen a wind mill there that is used to take water up from the ground and thats the meeting place of the thousands of animals coming from all directions in the dessert in the form of herds and their herd owners were already there. the animals that we saw there were mostly Cattle and camels. they came there for milking purpose and the people there treat us with their full hospitality and offered us the fresh Raw Milk and we drink all of that Bowl of milk that was offered us it was really energetic and yummy.

On our way back we have observed all the Doves in the desert that was also strange to observe, we were floating on sand and finally saw a tobha there to our south few miles away, so we left the path and moved towards the water reserve but unluckily it was dried and luckily we still have our inventory well in shape, finally we have decided to take our lunch there. 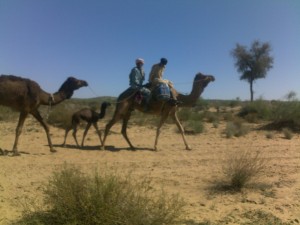 We took our lunch, a lunch that i dont think ican ever forget, a lunch that was firstly in the center of nowhere with my Best buddy and with no one in nearest miles just we and our vehicle.

After lunch we as per our Driver directions rushed towards the city as it was getting late and we are not in a mood to enjoy the night at that place without anything around.

I love saffari’s and Desert thing.. infact desert is nice thing and i love to be there akways whenever i went to Dubai, don’t miss this aswell…

Yup, I still Remember the time that we have spent in desert and luckily we have a good time and everything went fine, i still remember the hospitality of the Desert to your side because its never that calm and peacefull as it was on that day.. really.. I still Miss you and the journey that we have together nice to see myself in the article on this very natural and near to life Web Blog.. Keep posting good stuff…

Yup, I still Remember the time that we have spent in desert and luckily we have a good time and everything went fine, i still remember the hospitality of the Desert to your side because its never that calm and peacefull as it was on that day.. really..

This is a really great blog. Thx to the auther

considering the number of comments it appears your blog is very popular.

I just want to say I’m new to blogs and certainly liked you’re blog. More than likely I’m going to bookmark your blog . You actually have awesome articles and reviews. Thanks a bunch for sharing your webpage.

Wow that was unusual. I just wrote an really long comment but after I clicked submit my comment didn’t show up. Grrrr… well I’m not writing all that over again. Regardless, just wanted to say great blog!

Wow I considered I liked your site until I have got to this article. Now I’m having second thoughts, why would a person even bother to post this?

Hello I really like your post and I think that it’s curious. I would like to use it in my article. Is it possible? Of course, I will write a source

For these items is what it’s worth paying the cost of ADSL, although the most expensive in Europe, but to get home and connect and read this article, is certainly very rewarding. Okay, so I wish you to keep your blog and I will continue to visit, as they say very interesting things.

Some truly nice and utilitarian information on this site, as well I think the pattern contains fantastic features.

I have been surfing online more than 3 hours lately, but I by no means found any fascinating article like yours. It is lovely price sufficient for me. In my view, if all web owners and bloggers made just right content material as you probably did, the net shall be a lot more useful than ever before.