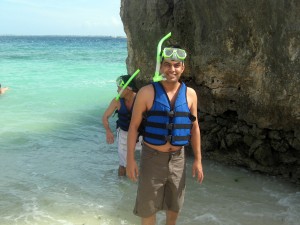 It was in October 2009 when I switched my job right after coming back from my trip to Srilanka, Malaysia and Thailand. Arriving in Pakistan is always puts a wide Smile on my face, as the love and patriotism play its role in my heart and my face clearly screen it up.

Subsequent to the Trip I just throw my head down and headed state to my work to excel in my respective professional field being a Veterinarian and Technical person in the organization has a lot to do and take care of, so as the time passes in December 2009 my boss comes up with a news that we are going to Cebu, Philippines for a training and a team building exercise. I was a little happy and a little confused both at the same time as you guys know that I am not very fond of flying, as flying is not my thing really.

So, now as we have to fly in the 3rd week of January 2010 so things have to be ready before time. So, I began with the Process to get the Filipino VISA, gash it was not that tough but I made it look bad as time is exhausting and has lots of pressure to get my Visa in time. Getting VISA for any country don’t really seems a problem for guys like us but the requirement that we need to fulfill puts you to the knees really. So, I started with the check list of the Visa requirement, now getting Character Certificate from Police as I knew that I have a good moral character but embassy needs it from the authority they can trust so I headed to my first task that sounds easy and it was as I asked my little friend Emmad to go ahead and grab the Police Character Certificate form, he delivered it to me in Office and next day I was there to submit it and within a day I got my Certificate. Now, that was kool and a sigh of relief.

Now after getting all requirements fulfilled I headed state to Islamabad to submit the documents to the embassy so that I can be able to fly in time, Luckily I got my passport back 02 days before the flight time, Now I tried to get the Thai Visa as we have a planned transit time there almost 12 hours both ways. Although Thai embassy guys are good enough to give back Passport with required Visa on next day but things didn’t support me much and I have to travel without Thai Visa that means that I have to spend many hours on SUVARNABHUMI INTL Airport, Bangkok.. Ahhhh that hurts really. But I have to go ahead with this reality.

I still remember that we have flight to catch on Saturday at 14:35 in the noon so have to be there at the Airport by 11 in the Morning, I called my Boss at 10 that am I supposed to come to office today? He answered why you want to have a day out? I replied “ we have a Flight to catch, Sir”, as he has to fly with me but he think that we have a flight on Monday So, he has to get along by doing things a little more quickly, yah finally he was there at the Airport with me and we are ready to go ahead. Getting in the plane, Thai Airways “Smooth as Silk” as there slogan, I really found them to have a very perfect line to explain their flights as they really fly smoothly through the Air to Bangkok, we have nice guys around with us in the flight they are going to Kuala Lumpur byu another connecting flight from Bangkok, they were the group some young college guys and girls with there teacher talking and chirping around, making fun and enjoying themselves with their teacher, we have a good company in the flight. Finally at 21:00 hours we reached SUVARNABHUMI INTL, Bangkok. Coming out of the Aircraft is the best feeling that I can have in the whole flying experience.

Now in the Airport I rushed directly to the boarding pass issuing booth and get my boarding card well in time right after that headed state to the phone booth to call my Dad, Mom and my beautiful wife that I have made it to Bangkok and landed safely. Now, that cost me only few Dollars it was easy. Now what? We have almost 08 hours and Bangkok Airport to explore. 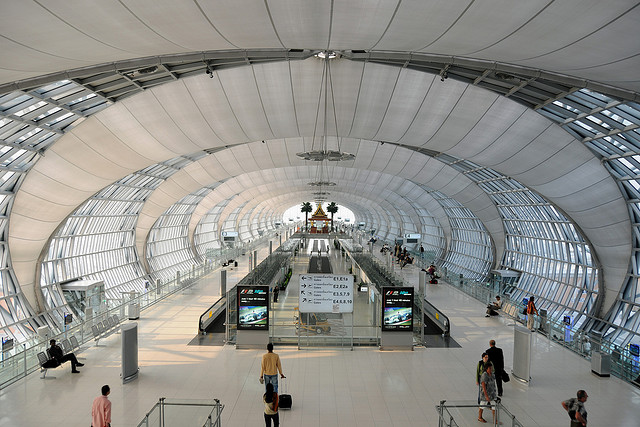 First thing that I did id to find the Halal Food restaurant in the transit Area, as I have been to this airport and spent 18 hours in one go here so the SUVARNABHUMI INTL, Bangkok is not that much unfamiliar but the transit Area is. So, finally we found one and I have a Halal Chicken Burger from there and all the activity in my belly comes to an end with this piece of food.

As, we already know that the Spicy Tamarind are quite famous so we get some and enjoyed the spicy, sweet and sour all at the same time, we really enjoyed that. Other then food I have a good round of the whole of the Duty Free Shopping Area at SUVARNABHUMI INTL, Bangkok and finally after 3 hours dying to get a couch to close my eyes, finally after a thorough search I found a couch on the second floor, as we were on the third so I have to go down one floor to get the couch before anyone else. So I succeeded and after that my Laptop bag under my head and I am state to my wife in my dreams. After 3 hours I just woke up but still have 02 more hours before we can Board the plane so I get the Free Internet usage ticket for 15 minutes issued on my passport from the customer care booth and started surfing on Internet for 15 Minutes.

I checked my Email, updated my status on FACEBOOK and finally when these 15 minutes comes to an end that was really surprising. Now, few hours finally comes to an end and we boarded our another plane “Smooth as Silk” state to NINOY AQUINO INTL, Manila but Manila is not our final destination we have to catch a flight from Manila to Cebu from the different terminal so we headed state out of the terminal after going through a tiredy process of Immigration in long state lines. Getting through Manila Airport we say the some important Political personality coming out of the Airport and there are lots of people to whom she waved and shaked hand the people handed over lots of flowers to her so she went away to where she was supposed to go.

Now as we have a flight to catch in next 03 hours we went state to the terminal 2 where we can get our flight from Manila to Cebu on Cebu Pacific Airlines, we tried taxi but it was really expensive so we waited for the Bus that took us state to the Terminal. Luckily in the bus we met a guy from Banglore, India he was also going to Cebu to install an accounting software on some Big Shopping Mall, we have a good chat with each other regarding whats going on in both countries Pakistan and India, being honest I guess I was a little harsh and as a result he was supposed to be on the same flight as we were but he disappeared like anything, still wonder where he went. So, at terminal II what we observed that there are only Cebu Pacific flights departing and arriving, so the very young girls and boys greeted us at the airport with yellow shirts, girls were looking really young and fantastic really. 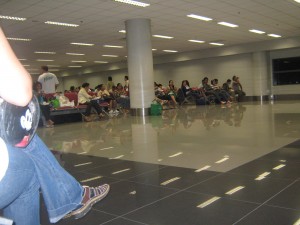 Subsequent to get our boarding cards we head state to the waiting launch but it was hurting to know that our flight is 06 hours delayed and we have to spent these 06 hours right at the airport in the waiting area watching planes depart and arrive but can’t board one so we kept waiting for our turn and times kept ticking but I felt that its running very slowly but you know guys waiting is never easy, I spent much time on Facebook and Gmail but you know 06 hours are too much as the waiting area is WIFI free so I found a switch as my computers battery was down at the corner of the room and sat down to charge my computer and besides that charging luckily my wife was online so we kept chatting and finally the clock started ticking fast.

I lied there on the floor and most of the chairs are already occupied so I get some nape aswell, I still remember that in the mean time we have a lunch time as well but they cannot offer me HALAL food so as a compensation the ladies in yellow tops gave us 10 dollars each to have some food.

This is a really great blog. Thx to the auther

Hi,this is an excellent article,I found it on yahoo and I love it very much,I agree with what you have said, lots of things will be learned form your site,but I still have some questions with the last part,can you explain it for me ?I will appreciate your answer,and I will be back again!

may be a error with your site.. considered you’d in all probability want to know

I just want to say I am newbie to weblog and honestly loved your website. Likely I’m likely to bookmark your blog . You certainly have fabulous writings. With thanks for sharing with us your web site.

This comment is to say thanks, i dont comment typically, but when i do it’s usually for something really great.

for the document I dont agree

Intriguing site. We might have utilized some of the information and not have thrown away so much energy.